I would have guessed that the “Word Search” puzzle has been around a long time, but apparently it really hasn’t.

“The word search puzzle was invented by the Spanish puzzlemaker Pedro Ocón de Oro, inventor of over 125 puzzle and word games, under the name Sopa de letras.”

“The first word search puzzle in the US appeared on March 1, 1968 in the Selenby Digest, a local want ad digest published in Norman, Oklahoma. Originally designed and published by Norman E. Gibat, the puzzles proved to be very popular locally and were eventually syndicated to newspapers across the country.” 1

I used to buy “Word Search” books as a kid. I always tried to keep my circled words very neat, but eventually it got pretty messy. Maybe using a highlighter would have been neater. Now they have apps that make the most perfect oval you’ve ever seen, even on a diagonal!

I also used to try to make my own “Word Search” puzzles occasionally. I would start with graph paper and put the letters in the boxes. For the final version I had to space everything perfectly on my Mother’s old typewriter.

I am very impressed with the “Word Search” puzzle generators that you can find online today. When I tried a program just for fun, it really criss crossed and packed the words in, making my puzzle very difficult. It sure seems like it would be fun to pick a topic like birds or animals or whatever and make your own puzzles to solve.2

Word Searches… I have been doing them since I was in 1st grade, maybe earlier. It was one of the first pencil puzzles I could solve.

Word Searches do not require knowing how to spell or definitions to solve. No math knowledge is needed, just the ability to look at letters in sequential order and circle them in a grid. Most words are found in a straight line, but the more challenging Word Searches have puzzlers where you find them in a rectangle or bending around a corner. Word Searches can be put into shaped grids to match the word themes. They can also be all numbers. More difficult puzzles have a word list to fill in as words are found. Some searches are so detailed that the remaining letters will form a phrase.

Word Searches are so popular they are used in newspapers, restaurant kid menus, Games Magazine and Dell/Penny Press Magazines. Teachers also use them for spelling and subject learning tools. 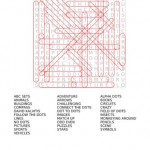 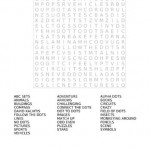