Home » Uncategorized » What Do You Use When Connecting the Dots?
Posted on August 6, 2013 by Terri-Lea · Leave a comment

When solving pencil puzzles most people use a pencil. The reason is obvious, so you can erase an error. The more confident puzzlers use a pen, making a cleaner, darker more defined line and image. Pencils are great for most paper puzzles like crosswords, word searches, fill-ins, cryptograms and Sudoku. But what about puzzles that create an image, like a dot to dot? Simple images for younger kids can be done using almost anything, including a crayon. The dots are usually spaced far enough apart for thick fuzzy lines to be seen clearly.

When solving more challenging dot to dot puzzles with lots of numbers, for older kids and adults, what should you use? 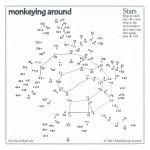 • Pencils are adequate, especially if you make a mistake, but provide a very faint image. The dark black dots and numbers tend to make it hard to see a light pencil line drawing. I previously used a pencil while I was testing the puzzles because making a mistake the first time through does happen a lot. 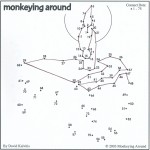 • Pens are acceptable because they can make the final picture show up better than a pencil. But, what happens when you make an error? Crossed out lines or white out… Recently I have found the Pilot Frixion Erasable Pen. It makes a clean line because it’s a pen, but it erases like a pencil. I love it and it comes in different colors as well. There is one drawback with the Pilot Frixion Erasable Pen though.  Heat from the eraser causes the ink to disappear, so the ink lines are susceptible to any form of heat, for instance, don’t leave your book in a hot car.  But if you accidentally do, just put it in the freezer. 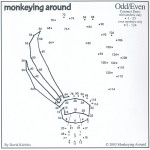 • Markers (which is what David Kalvitis prefers) make the darkest heaviest lines and make the final picture’s lines much more clearly visible. But, as with a pen, it is not erasable, so it is recommended only for the most confident of puzzlers. When it comes to the Greatest Dot-to-Dot Books, David always recommends a Flair Fine Point or thin Crayola marker, as it more dramatically pops the image out from around the clusters of dots and numbers.

• Chalk is horrible, especially since it’s usually white, but David thought it would be funny to include anyways. (No image included)

If you are worried about making a mistake and ruining the final picture, lightly use a pencil first. You can always go back over the lines later with a heavier or darker pen or marker.  This is also a great way to teach younger children to count.  You do the puzzle in pencil and have them retrace the image in marker or pen.

Take a look at the images below and you decide which makes a better image.

There is no right or wrong choice… But…       Be Bold When Connecting the Dots!